The Udmurt Republic (Udmurtia) was formed in 1993 and covers an area of 42 100 km2. Udmurtia is located in the western part of the Central Urals between the Kama and Vyatka rivers. The main rivers are the Kama and tributaries of the Vyatka, such as the Cheptsa and Kilmez. The Votkinskoe Reservoir is another important body of water. The republic has a developed railway system (total length of 877 km) connected with the main lines of the Northern and Gorki railways. Udmurtia is divided into 25 districts and includes 5 cities, 11 urban communities, and 302 rural administrations. It has a multinational population of more than 1,507,400 people; the main nationalities are Russians (62,2%), Udmurts (28%), and Tatars (6,74%). About 70% of the population is concentrated in the cities and urban communities. 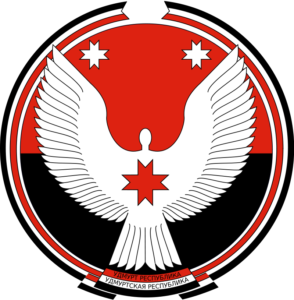 Udmurtia has a temperate continental climate with an average January temperature of around -14 °C and an average July (the warmest month) temperature of +19 °C. Average precipitation is from 400 to 600 mm. The vegetation season is about 150 days.

Ferrous metallurgy and the forest and woodworking, chemical, glass, and light industries are generally developed in the republic. The main industrial centers are the cities of Izhevsk, Sarapul, Votkinsk, and Glazov.

The capital of the Udmurt Republic is Izhevsk, founded in 1760 as a village for Count Petr Shuvalov’s ironworks. Today, more than 654 500 people live in Izhevsk. A large number of enterprises in the metallurgy, engineering, precision instrument, and other industries are located here. The city is also an important scientific and cultural center with strong intellectual potential.
↑top

It is clear from Udmurtia’s history that in ancient times the Udmurts lived in the territory of present-day Kirov Region and Tatarstan in order to avoid interethnic conflicts and the strong influence of Christianity, which increased after the conquest of Kazan. Improvisation played a very important role in their prayers and religious ceremonies. The Udmurts had no written language, so they could understand one another only through nonverbal means of communication. The Udmurts were known for their weaving and artistic woodworking, and they still create beautiful decorative articles today. In ancient times, these articles were used for ritual purposes and in everyday life. Russians had already settled in Udmurtia by the end of the 12th century. Many came from the Novogorod Region, which explains certain distinctive features of Russian pronunciation and folklore in the Udmurt Republic. The capture of Kazan in 1552 cleared the way for the first large Russian settlements.

The first grammatical dictionaries, translations of the Bible, and national Udmurt literary works began to appear starting in 1740. The first national intellectuals, i.e., the clergy, also appeared during this time. The first private factory was founded in 1756 to process copper, and private ironworks appeared later. In 1780, the district centers of Glazov and Sarapul became the first communities to acquire city status. The second half of the 19th century was a period of rapid industrial and cultural development in Udmurtia. Private factories, banks, gymnasia, industrial colleges, theaters, and libraries were opened. Articles produced by regional enterprises were often displayed at the largest exhibitions in Russia and abroad. In 1899, the main Perm-Kotlas railway line passed through northern Udmurtia, further advancing the republic’s economic development.

Due to the ramified network of culture and art establishments as well as the activity of creative Unions of writers, composers, architects, artists, designers, theatrical workers, professional and folk art develop steadily and remarkably in the Udmurt Republic. This refers not only to the Udmurt art but also to the art of the Russians, Tatars, Mari, and other people. For many years the “Italmas” ensemble of Song and Dance has been widely famous (Artistic Director – Anatoly Mamontov). Theater of folk song “Aikai”, folklore ensemble “Zangari”, Russian ensemble of Song and Dance “Tanok”, Tatar ensemble “Guzel” are also very popular. The musical talent of the Udmurt people gave birth to a great number of outstanding professional and amateur composers.

Udmurt belles lettres have a two centuries tradition arisen in ecclesiastical texts. From the first classic writers, Grigori Vereshagin and Kuzebai Gerd via creative works of prominent masters of “socialist realism” such as Arhipov T., Krasilnikov G., Petrov M., national literature moved to the larger freedom and sincerity (Vasiliev F., Romanov V., Perevozchikov G. ). The Russian literature is honorably presented by Boltyshev V., Kulyashov P., Poskrebyshev O. Theatrical art has no similar old traditions. However, powerful creative companies of actors and actresses formed in the Russian and Udmurt dramatic theaters in Izhevsk, Opera and Ballet Theater of the Udmurt Republic as well as theaters in Glazov and Sarapul.

Fine arts, as well as literature, was developing overcoming strict academic traditions which brought up great artists-traditionalists such as Kholmogorov A., Semenov P., Yelkin P. In the 90 s the artists with the more relaxed manner of painting declared themselves. Creative works of Kononov V., Orlov S., Korol M. as well as drawings of Garipov M., Safiullin A., Lubarz V., and sculptures of Anikin A., Bushkova Z., Medvedev P., attract intent attention of the art connoisseurs. The art of industrial design and the metal engraving has long traditions. There are not many achievements in modern architecture, but in former times a lot of beautiful architectural ensembles were created in various styles reflecting the designs of different historical periods.

Nowadays in the Udmurt Republic, there are 8 professional theaters, 5 state creative musical groups, the Philharmonic Society, and a state circus, currently under reconstruction. Over ten (with branches) state and several dozens of public museums, telling about the history and the original culture of the country and its people are at the guests disposal. Besides republican libraries and town Houses of Culture, there are centralized library systems and rural centers of leisure in each of the 25 districts.
↑top

The Udmurtia Republic has all forms of transportation (railway, motorway, waterway, and air) with the other regions of Russia. The Izhevsk airport is certified for the first category of ICAO. The transportation network is comprised of 878 km of railways (504 km of which are electrified), 4469 km of paved roads, and 178 km of inner navigable waterways. Main wharves are at Sarapul and Kambarka. Navigation is organized on the Kama river along 162 km of its length within the republic and lasts for 6.5 months a year.
↑top

There are many historical and cultural landmarks in Udmurtia. Its flora and fauna are also very interesting.
People are proud of the fact that genius Russian composer P.I. Chaikovski was born in Udmurtia. The P.I.Chaikovski’s House-museum – a unique memorial architectural ensemble – is in Votkinsk (40 km from Izhevsk). The Chaikovski family relics are presented there.

The museum of Mikhail T.Kalashnikov, the general designer of the world-renowned submachine-gun AKM, is currently being built.

Hunting is very popular here. Hunting of wood-grouse, heath-cocks, wild ducks, wild bears, and wolves is permitted.
There are 26 hotels in Udmurtia.

All kinds of communication are available in the republic.
↑top

Tourism in Republic of Udmurtia