The Mari El Republic is situated in the basin of the middle Volga River. Extending north from the left bank of the Volga and drained by its tributaries, the Vetluga, Bolshaya and Malaya Kokshaga, and Ilet, the republic consists of a level, often swampy, plain that rises gently toward the east, where it merges with the low Vyatka Hills.
Total area of the republic is 23 300 km2 (57% forests, 38.9% farmlands, 1% swamps, 3% water). There are 476 large and small rivers, 11 rivers of economic importance, and over 200 large lakes.

The capital city of Mari El is Yoshkar-Ola, and the distance from Moscow is 825 km. 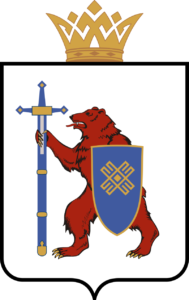 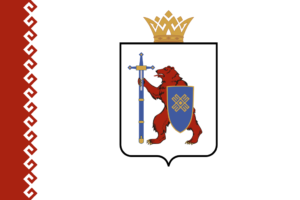 The climate is temperate continental with long cold winters and warm summers. Average summer temperatures are from +18 to +20°C. The hottest weather is in July when air temperatures reach +34 to +36°C. Fall weather is cold and damp with a predominance of chilly winds and rain. Early frosts and snow are likely. November is the windiest month. Winter generally begins in November; average winter temperatures are -18 to -19°C. January is the coldest month. The Republic of Mari El is an excellent place for winter sports like skiing and skating. Spring is usually cool and dry.
↑top

The Mari (formerly officially known as the Cheremis) who make up the republic’s indigenous population, formed at the end of the first millennium A.D. They belong to the Finno-Ugric language family of nations. They were initially subjects of the Khazar Kaganat and then successively subjects of the Volga Bulgars, the Golden Horde, and the Kazan Khanate. For a long time, the territory inhabited by the Mari was the site of a fierce struggle between West and East, Slavs and Turkis, and Christianity and Islam.

In the mid-16th century, the territory of the Mari was annexed to the Russian state. From that time on, its history was closely intertwined with the history of Russia, the Russian people, and other peoples of the country.

Until the October Revolution, the Mari had no state of their own and were dispersed throughout Kazan, Vyatsk, Nizhny Novgorod, Ufa, and Ekaterinburg provinces. Today, only 324 300 Mari of a total population of 670 000 live in the Republic of Mari El. Historically, it has turned out that 51.7% of the Mari live outside their republic, including 4.1% living outside Russia.

Important Historical Dates:
• On November 4, 1920, the Mari Autonomous Region was formed by a decree of the All-Russian Central Executive Committee and the Council of People’s Commissars of the RSFSR.
• On December 5, 1936, in accordance with the Constitution of the USSR, the autonomous region was reorganized into the Mari Autonomous Soviet Socialist Republic (Mari ASSR).
• On December 22, 1990, the Supreme Soviet of the Mari ASSR passed a Declaration of state sovereignty of the republic. The republic now had a State Flag, Emblem, and Anthem.
• The office of the President was instituted at the end of 1991.
• On March 22, 1992, the Republic of Mari El and other subjects of the Russian Federation signed a federative agreement.
• On July 8, 1992, the republic became officially known as the Republic of Mari El (el – country).
↑top

The Republic of Mari El is located in the eastern part of the East European Plain in the central Volga River basin. It borders on Kirov Region in the north, northeast, and east; on the Republic of Tatarstan and Chuvashia on the southeast and east; and on Nizhny Novgorod Region on the west and northwest. The border of the republic is 1200 km long, and its total area is 23 300 km2.

The Volga River, the longest and deepest river in Europe, flows through Mari El for a length of 155 km. The museums of the city of Kozmodemyansk and Sheremetevo Castle in the village of Yurino are located on its banks.

Numerous mineral springs with many outlets in the Ilet and Yushut river valleys are used for medicinal purposes at health and recreation centers and in hospitals.

Lakes are the territory’s national property. Plunge-basin, interdune, and floodplain lakes invariably attract with their summer coolness and clear freshwater. Plunge-basin lakes are mainly located on the southern and southwestern slopes of the Mariisko-Vyatsky Ridge; most of them are found in the lower course of the Ilet River, for example, Yalchik, Glukhoe, Bezdonnoe, and Kichier lakes.

The largest group of such lakes is found on the edge of the northern scarp of the Sotnurskaya Upland, where there is a chain of 11 lakes, including 35-m-deep Morskoi Glaz lake; another 6 lakes are found at the foot of the Kerebelyakskaya Upland.

The deepest sink lake in the Republic of Mari El is Lake Zryv, with depths of up to 56 m. Most of the plunge-basin lakes found in forests are very picturesque. Tourist facilities, sports and recreation camps, and health and vacation centers are located on their shores.

Mari Chodra National Park on Klenovaya Gora (Maple Mountain) is an interesting natural area. The Klenovaya Gora health center is located here, as well as popular tourist spots like Green Spring (Zeleny Klyuch) and Yalchik, Mashiner, Glukhoe, and Konaner lakes. The Ilet, Yushut, and Petyalka rivers flow through the park. An ancient oak, known as the Pugachevsky oak, is preserved here. According to tradition, Emelyan Pugachev (Cossack leader of a rebellion against the authorities in 1773) and his troops camped for the night under the canopy of this oak. The oak stands out from the rest of the grove because of its size. This gigantic tree with a mighty truck 159 cm in diameter reaches into the upper layer of the canopy. The Pugachevsky oak by itself represents a precious natural monument.

The republic has five recreational areas set aside for sports and leisure and educational tourism. There are also organized active recreational tours, for example, boat tours on the Malaya and Bolshaya Kokshaga, Bolshoi Kundysh, Ilet, Nemda, and Volga rivers; hiking and horseback riding in the southwestern, southern, and northeastern parts of the republic; and cycling and skiing throughout the territory.

Pilgrimages to holy sites (monasteries, churches, sacred springs) and sacred groves are always popular. The national culture of Mari El is rich and varied. Cultural and economic ties have traditionally been developed with other Finno-Ugric nations. Hungary, Finland, and the Baltic countries are long-standing stable partners of the Republic of Mari El.

The Republic of Mari El has a wealth of water resources. The Ilets, Bolshaya Kokshaga, Yushut, and Kundysh rivers are classed among the cleanest rivers in Europe, while Yalchik, Kichier, and Karas lakes are the pearls of the Mari region. Altogether, there are more than 200 large lakes in the republic. This beautiful clean region with its extensive forests and numerous lakes and rivers attracts both foreign and domestic tourists with exotic opportunities for active recreation, such as horseback riding, fishing, and hunting (bears, wolves, foxes, wild boars, moose, and wild birds). Hunting of wood and black grouse is of special interest.

Tourism in Republic of Mari El

Yoshkar-Ola Airport operates in the republic.

There is a railway terminal and a bus depot, 17 railway stations, 30 bus stations, a river port in the city of Kozmodemyansk on the Volga, five local ports, and facilities for unloading barges.

A well-developed transportation network including all forms of transport is at the service of tourists. This network includes river transport along the Volga and Vetluga rivers with landings in the cities of Zvenigovo, Volzhsk, and Kozmodemyansk and the villages of Yurino and Kokshaisk. The Yoshkar-Ola airport is connected to airports in Moscow, Nizhny Novgorod, and Saratov. There are also railway connections to Moscow, Kazan, and Yaransk. Highways have been built to Cheboksary and Kazan.
↑top